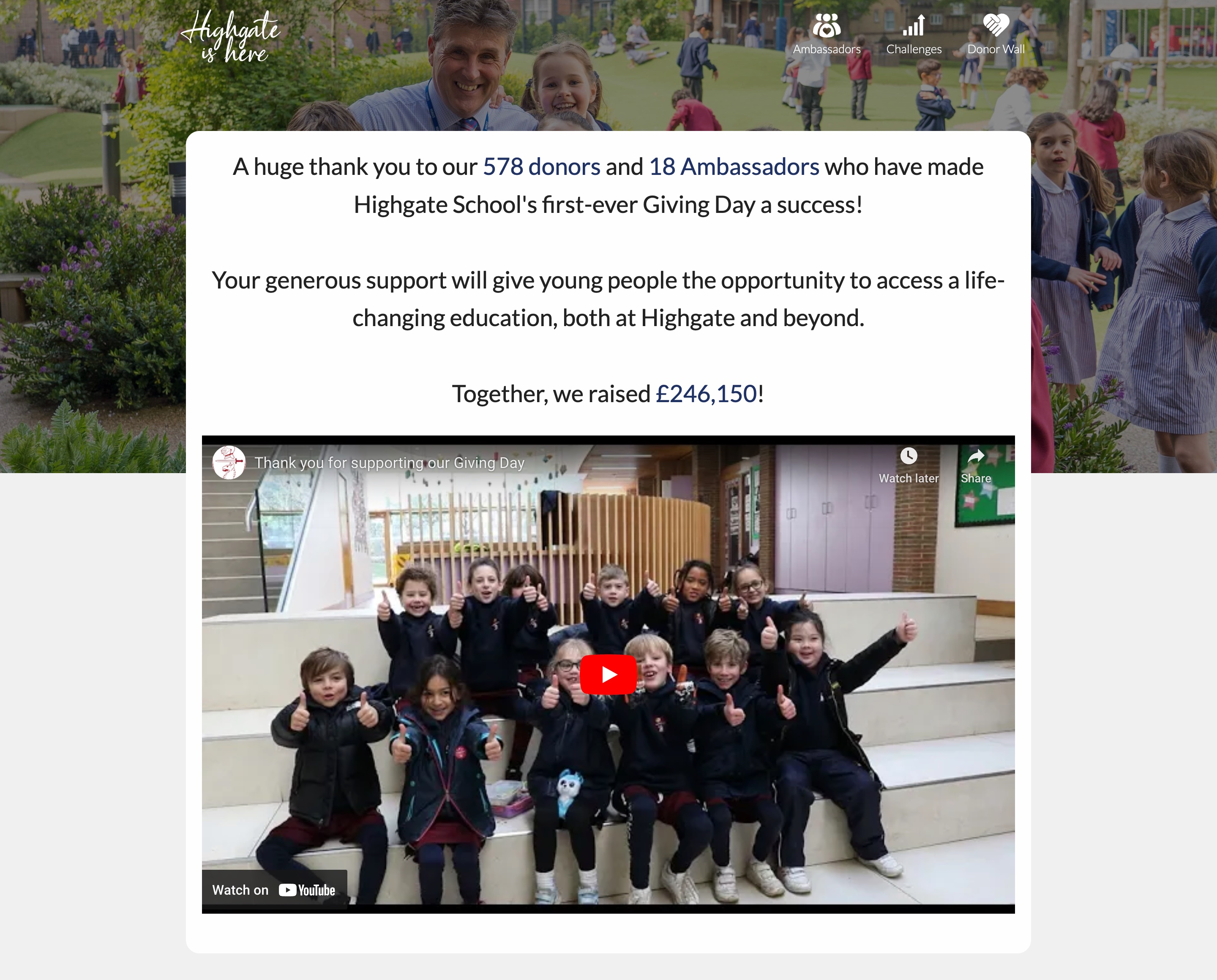 As one of the UK’s leading independent schools, Highgate prides itself on making a difference to the lives of thousands of children every year. They are a school with charitable foundations, demonstrated by their bursary programme and their work with local state schools that benefit thousands of children across London each year.

Highgate is Here - their charitable campaign - builds on their nationally-recognised educational partnerships and deep-rooted links with Highgate’s local community to provide a real and lasting impact.

To increase participation in their current campaign from alumni, parents, staff and the local community, Highgate sought the guidance of Hubbub to lead them through their first-ever Giving Day. This is their experience.

Why did you first consider running a Giving Day at Highgate?

We first began discussing the idea of a Giving Day early in 2020, having seen the growing number of universities and schools that were seeing success with their own. We have run a number of telephone and direct mail campaigns in the past, but wanted to try something new that wouldn’t be quite as costly as the former and to which our community would respond in greater numbers than the latter. At the time, our online giving functionality of our website was not particularly user friendly, so we wanted to provide an online experience that would make it easy for those connected to Highgate to donate.

In addition, we considered the following factors:

Do you feel your Giving Day achieved its objectives?

We wanted to achieve the following. We arrived at specific figures through an analysis of our database with guidance from Hubbub:

And, I’m pleased to say that we met our objectives.

We were also very happy with how well the Giving Day increased awareness of our charitable objectives with stakeholders across the school and in our OC community (what we call Highgate’s alumni).

An additional bonus from the day was the extremely positive interactions that we had with major donors, a group of whom were motivated to put their philanthropic support behind our significant pool of Match and Challenge funding.

How do you think your Giving Day will help to improve further engagement and giving with your supporters?

The communications we sent out and the momentum generated by the Giving Day has undoubtedly helped cement the aims of Highgate is Here in our community. Following our Giving Day, more alumni and parents know about our wider charitable campaign, and we’ve received more regular offers of support. Crowdfunders that we have run since the Giving Day, such as support for refugee pupils and a legacy endowment for a long-serving principal, have also hit their milestone targets earlier than we might have expected.

From a pipeline development perspective, three individuals who made a gift for the first time on our Giving Day have said they will increase their gift to be part of the match pool for our next Giving Day. Our existing match donors have also said how pleased they were that their gift motivated others. Additional major donors and prospects have made significant gifts, earlier than expected, to other match funds, largely thanks to the evidence of the impact of match funding from the Giving Day.

Our engagement with our own staff and pupils will certainly have been helped by running the Giving Day. Nearly every pupil in the school, from 4 to 18 years of age, took part in a challenge and staff played a vital role in communicating the importance of the day to their tutor groups in the months leading up to the day. Staff already feel more confident explaining how the school they work for functions as a charity and more regularly approach the Development Office with ideas.

The Giving Day saw 202 people make a gift for the first time. These are people that may not have donated if it weren’t for the Giving Day, and we are excited to take all these new donors on a journey with Highgate, ultimately supporting our institutional aim of substantially increasing the number of people that make a regular gift. It would have been much more difficult to find over 200 new donors in such a short space of time without something as exciting and effective as the Giving Day.

What was your experience of working with the Hubbub team?

The Hubbub team were very knowledgeable about Giving Days and made every effort to get to know our team, our school, and our values. They provided extremely helpful resources, which they had clearly proactively created,  which helped to answer most of our questions early on, along with examples of best practice from previous clients. Both their strategic and technical support were invaluable. I would not hesitate to recommend them.

All the features that we felt were lacking from the platform or the back-end user experience are already in Hubbub’s development pipeline, so they are also clearly looking to continually improve their service based on the feedback of their customers.

What advice or guidance would you give to others who are thinking of running a Giving Day?

Giving Days are significant undertakings. You can’t do it on your own, or indeed just as a Development Office. You will need a team behind you from across your community, from teaching staff to proactive pupils, to parents/carers and influential members of your alumni community to help spread the word.

Have a strong sense of what stories you want to tell, and which voices you would like to use to tell them. Your messaging will be stronger and will appeal to more supporters if you tell a wide range of stories from a diverse set of voices.

Don’t assume that ambassadors will sign up naturally – you get as much out as you put in when it comes to ambassadors. Run focus groups, invite people to Q&A sessions, utilise existing parent and alumni networks, join parent WhatsApp groups – we did all these things far too late and could have done more through our ambassadors if we had worked harder to drive sign ups.

Try to get your match pool finalised early. Engage with your major donors and explore their interest in providing a match or challenge gift as early as possible. As the months tick on, you will want to be busy planning other things.

Is there anything else you would like to share about your Giving Day Experience with others in the sector?

It took longer than we expected for people to ‘get’ what a Giving Day was. While it is tempting to get stuck into telling your stories and announcing your challenges, it is very important to do the groundwork early and make sure every stakeholder in your school community understands what the day involves and how they can support it. Running assemblies, staff meetings, focus groups, coffee mornings and dropping in on existing pupil, parent and alumni groups is a very good way to pique interest before you start your communications in earnest.

Invest Time in Your Communications

Don’t forget to have fun!

Giving Days are hard work to plan, and your team will be extremely busy in the build-up and during the 36 hours of the day itself, but they are a unique opportunity to get everybody in your institution having fun and pulling together to do something good.

Giving Days are hard work to plan, and your team will be extremely busy in the build-up and during the 36 hours of the day itself, but they are a unique opportunity to get everybody in your institution having fun and pulling together to do something good.